Accordance Conference: An excursion at the interface of scripture and technology

The opportunity to meet Oak Tree staff and mingle with a combination of academic users, pastors and passionate lay users at the recent Accordance Conference put a human face on my own use of this beloved software. Accordance brings so many different kinds of people together! Insightful accounts of the conference are available from David Lang

. In the latter presentation, I was moved very deeply by Daniel Wallace’s accounts of the eagerness of monasteries around the world to digitally preserve their most fragile manuscripts, and by his slides showing the recovery of long-lost text through UV lamps and other measures. A technical session by Robert Holmstedt on Accordance’s new syntax modules for the Old

Testaments effectively combined linguistic theory and practice, and like other sessions provoked tantalizing reflections on the potential of digital tools for research and Bible study. The panel discussion on the present and future of mobile software was enlightening, particularly with respect to the ways the iPad is already transforming publisher decisions and consumer behavior. Attendees were delighted and surprised by a demonstration of the forthcoming Accordance iPhone app

, which seemed to make all the right design decisions to translate the soul of the Accordance user experience into the world of a touch interface and smaller screen. (For more info or to download Holmstedt’s paper see Mansfield’s report

The interweaving of technology and scripture has been a remarkable phenomenon throughout human history. This is one of the themes I emphasize when showing works from the Bizzell Bible Collection, such as the ones illustrated in the remainder of this post.

Examples of technological innovations stimulated by the Bible, some illustrated below, include:

So it’s not surprising to see how technology and scripture come together again in such fascinating ways with the Accordance user community. Accordance represents history-in-the-making for the 21st century. I’m looking forward to the next Accordance Conference already. Latin Vulgate, printed in 1479 by Anthony Koberger in Nuremberg: The Koberger Vulgate is the earliest Bible to contain a woodcut, hand-colored in the OU copy. After Gutenberg printed 180 copies of the Vulgate in 1454, the printing press led to incalculable cultural changes.

The complete German Bible of Martin Luther (1483-1546) was first printed at Wittenberg in 1534 by Hans Luft. Over 100,000 copies were sold in 40 years. Luther translated the Bible from Hebrew and Greek sources during his exile in the Wartburg castle, where he was protected by Frederick the Wise of Saxony after his famous confrontation with the Roman Catholic Church and Holy Roman Emperor Charles V at the Diet of Wurms. The power of printed books to transform society is evident in that as many as one third of the books printed in Germany during the 1530’s were written by Martin Luther. Because of the dependence of the Protestant Reformation upon the printing press, many argue that printing caused greater cultural change in early modern Europe than has yet been realized by the Internet in the modern world. Luther’s Bible, printed by Christoph Saur, 1743 (above and below). The German translation of Martin Luther became the first Bible printed in America in a European language, yet the publisher nearly went bankrupt from giving away copies of his Bible to poor families. Saur later printed works for the Continental Congress. With verse divisions, a small and readable font, cross-references to parallel passages and extensive marginal annotations, the Geneva Bible transformed the way people read scripture and debated theology. With this hand-sized lay study Bible, the word of God spread like a flame to the home and tavern, outside the walls of hierarchical institutions such as the church and university. 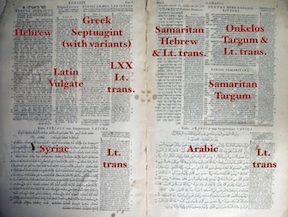 The polyglot of Brian Walton was a monumental achievement of 17th century scholarship, the culmination of two centuries of humanist collation and criticism of biblical texts. Including texts in nine languages, Walton’s aim in the polyglot was “not only exhibit to the reader all the ancient and chief Translations, together with the Originals, but also the chief Copies, MSS., or others, of both, so that in this Edition the reader might have all or most other editions, and the best MSS. which he might consult at pleasure.” 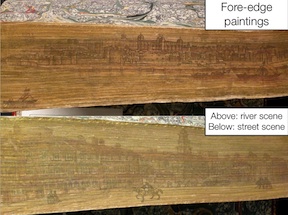 A delightful example of the book arts is fore-edge painting, a late 18th and early 19th century practice of book ornamentation. When the Bible is closed and one observes the text block from the side, all that is seen is a gilded edge. Yet when the Bible is open and read from front to back, the pages roll from one side to the other, revealing two different fore-edge paintings. The full beauty of the Bible is hidden when it’s on the shelf or altar, and revealed only in the act of reading. This Bible was translated by William Carey of the Calcutta Inland Mission. Carey also translated the Hindu scriptures from Sanskrit into Bengali so that natives of India could read both scriptures side by side. Carey played a crucial role in launching the worldwide missionary expansion of Christianity in the 19th century. As a result of two centuries of global expansion, the majority of Christians today live outside of Europe and the United States. In the 17th century, the inventor of shorthand created a miniature New Testament published in three tiny volumes. 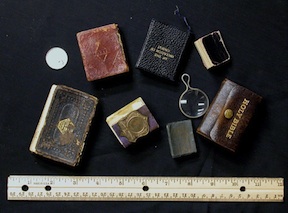 Printed miniature Bibles were a triumph of early 20th-century publishing. Even with a magnifying glass included, it’s hard to read when the whole Bible is not much larger than a nickel.

The parallels are obvious between Accordance and all of the above examples of the Bible and printing history. In Accordance, commentary cannot literally surround a text as in the 1489 Augustine, but texts and commentaries scroll together in the same workspace. So the Bible remains as central as the Augustinian text in the sense that one need not leave the biblical text to consult a commentary or other resource.

Accordance brings together the entire history of the Bible, for available historic texts include ancient codices, the Vulgate, Apostolic Fathers, Luther’s Bible, the Geneva Bible and countless others.

The Communication Revolution brought about by the personal computer and Internet has not yet established a second Reformation in parallel with the Printing Revolution, yet Accordance, by its presence on the Mac for nearly 20 years and by its forthcoming iOS apps, along with web initiatives like the NET Bible, are transforming personal as well as academic study of the Bible by users from all around the globe. It is perhaps not too much to assume that a world-wide spiritual reformation may be underway in which digital tools are playing a significant role.

Just as subversively as the Geneva Bible, Accordance offers a “study Bible on steroids” on your laptop or iOS device for ready access at home or tavern, and even in the church and university.

Do you wish to follow in the footsteps of the great polyglots? Accordance allows you to set up workspaces with the complexity of Walton’s, juxtaposing Hebrew, Septuagint, Syriac, Vulgate, and even texts not available to early modern scholars such as recent eclectic editions, text critical apparatuses, and the Dead Sea Scrolls. Even on the largest MacBook Pro, Accordance packs more texts and more power into an integrated user interface that is so much smaller and lighter than Walton’s seven massive folio volumes!

My MacBook Pro has no fore-edge paintings, unfortunately. If I’m unwilling to paint its elegant aluminum edges, yet wish to see artwork or photographs as I read, I can set up zones to display the PhotoGuide or Bible Art modules adjacent to the biblical text.

Need a Bible in Bengali or some other language? If the language you want is not available for sale in the Accordance online store, check out the User Exchange, where translations in many languages may be downloaded free of charge.

Want the Bible in your pocket, but not so small as to require a magnifying glass? Accordance for iOS will bring your texts and modules with you as you go — we can carry the entire Yale Anchor Bible Dictionary in our pockets in less space than the original shorthand Bible!

[Note: Perhaps I’ll get a chance to add Accordance screenshots to illustrate these paragraphs sometime in the future.]

5 Responses to Accordance Conference: An excursion at the interface of scripture and technology