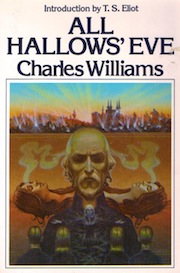 Back in 1987, Hal Pendergrass offered some of the best advice I have ever received about reading imaginative literature along with nonfiction:

It’s not healthy to forsake good imaginative literature while you’re studying science or theology – as I’m sure you believe. So I don’t think it’s foolish for me to drop some more reading on you in the thick of your doctoral studies. No one, I believe, can read Chas Wms and walk away unchanged – for the good. As far out & wild as his imaginative images get, the end effect is to make the presence of God more vivid & concrete in day to day living. In this respect, he is CS Lewis squared, or cubed. I hope it does for you what it did for me.

Merriest of Christmases to you, Candace & adorable Rachel –

When he gave me that copy of All Hallows Eve, by Charles Williams

, it was my first introduction to this lesser-known member of the Inklings

. During my graduate program I followed Hal’s suggestion, and ended up reading most of Williams’ 7 novels and a little of his non-fiction. In an interesting confirmation of Hal’s advice, I found Williams’ novel The Place of the Lion an invaluable window into the archetypal thinking of 19th-century Platonist natural philosophers. Without Williams, for example, I would never have understood Richard Owen. But Williams is so much more.

What Hal and Williams both understood is that the vigorous exercise of the imagination is anything but a flight from reality. Rather, imagination is a faculty of perception, apart from which one’s only grasp of reality becomes grotesquely deficient. A failure of imagination is a far more serious affliction than being color blind to the world and misperceiving only the surfaces of things; for imagination grasps the way things really are. Imagination is the fountain of all art and science. Without imagination we perish. All Hallows Eve, with its introduction by T.S. Eliot, reinvigorates the imaginative faculty.

It has been a long time now since I’ve read Williams, although my thoughts often return to him. Yet I have made it a habit to follow Hal’s sage advice about coupling imaginative literature with non-fiction reading. Maybe that’s why I now find that reading George MacDonald

, or the latest historical monograph in my field

. If I go too long without the former, my appreciation of the latter unjustly dulls. Anyone seeking shock therapy to cure the imagination-deficit malady might as well start with Williams. 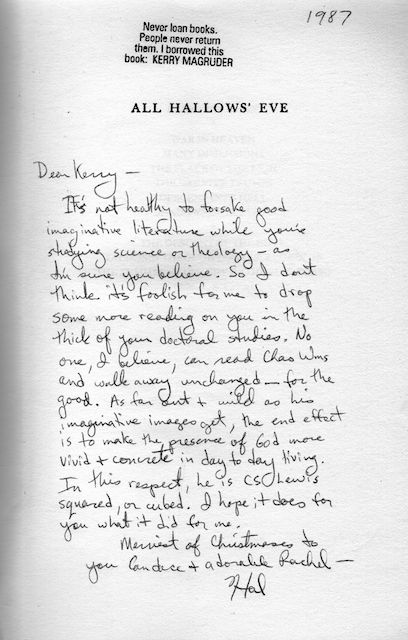 This entry was posted in Art-Music-Lit, History of Science and tagged Charles Williams. Bookmark the permalink.