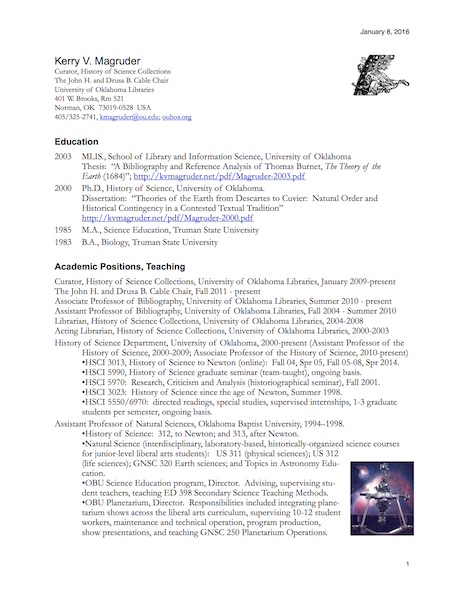 Kerry V. Magruder is the curator for the Galileo’s World exhibition at the University of Oklahoma. He earned undergraduate and graduate degrees from Truman State University in Missouri, and a masters in library science and a doctorate in history of science from OU. His background includes teaching high school chemistry and biology, directing a university planetarium, and teaching university astronomy, geology, science education, and history of science.

Since 2000, Dr. Magruder has served in the History of Science Collections, University of Oklahoma Libraries. In 2009 he became Curator and in 2011 received the John H. and Drusa B. Cable Chair.

Magruder has presented scholarly talks in many academic conferences, universities and research labs in both America and Europe. An online Galileo exhibit by Magruder was recognized with a best of the web award from the Griffith Planetarium in 2006. Magruder has presented talks on Galileo at the Fermi Lab accelerator in the Chicago area and NASA headquarters in Langley, VA, as well as to astronomy/physics programs at Michigan State, New Mexico State, and Florida State, among others.

Magruder also served as content consultant for the “Beautiful Science” exhibition of the Huntington Library, which won the American Association of Museum’s “Excellence in Education” award for best new exhibit of 2009.

Magruder’s published articles deal with geology, cosmology, Galileo, and science and religion in the early modern period. A publication on Jesuit cosmology in the generation after Galileo is “Jesuit Science after Galileo: The Cosmology of Gabriele Beati,” Centaurus 2009, 51: 189-212.