Update 3/9/2012: The Green collection is now at the Vatican; see this account at the National Catholic Register

Note: The Passages speaker series DVDs can be purchased from mardel.com individually

or as a set

Update 10/20/2011: The Passages exhibit and speaker series has now closed in Oklahoma City and is on its way to Atlanta, GA, where it will again be accompanied by another speaker series. Whether you saw the exhibit in Oklahoma City or were not able to come, to better appreciate what went on here, gather the family around and watch the first 18 minutes of a video broadcast by OETA on August 31, 2011: 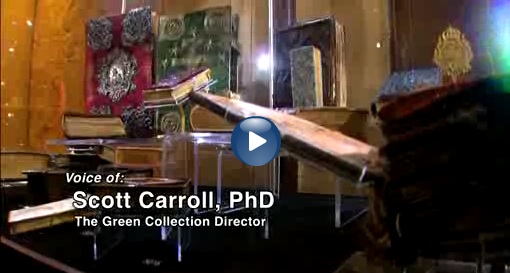 Here’s a shorter video in which Scott Carroll describes the Green Collection and their plans for a permanent Bible museum:

Manuscripts and artifacts of the Green Collection are already being sent to dozens of collaborating universities for research and publication.

“Our goal is to make the Bible accessible like never before by enabling people of all interests to go behind the scenes of the most-banned, most-debated, best-selling book of all time.” -Steve Green

In celebration of 2011 as the 400th anniversary of the King James Version of the Bible, many institutions are hosting Bible exhibits this year – as I plan to do in the History of Science Collections in November and December. But from May 16 through October 16 at the Oklahoma City Museum of Art, the Passages exhibition

is displaying select items from the remarkable Steve Green

Collection. In this post, I’ll (1) note some highlights of the Green Collection, (2) offer a few tips for viewing the Passages Exhibition, and (3) applaud the scholarship represented in the free Speakers Series.

courtesy of The Green Collection.

The Codex Climaci Rescriptus is an appropriate exemplar of the significance of the Green collection. Using a new technology developed by The Green Collection in collaboration with Oxford University, scholars have uncovered the earliest surviving New Testament written in Palestinian Aramaic – the language used in Jesus’ household – found on recycled parchment, under a later Syriac text, in this rare manuscript (video

). The story of the 19th-century discovery of manuscripts at Saint Catherine’s monastery in the Sinai peninsula by two Scottish twins is told in a lively account which mentions this manuscript by Janet Soskice, Sisters at Sinai (NYT review

The Green Collection is already supporting research in a large number of collaborating universities, and through the Green Scholars Initiative

is even being opened for undergraduate research to serve the next generation of scholars of ancient texts. This vision for a research collection is tremendously exciting!

, more about the Passages exhibit

, and read an interview with Scott Carroll

of the Green Collection (cf. more about Carroll’s previous work

I urge anyone interested in the history of the Bible and its role in western and world culture, or in the history of writing and the Printing Revolution, to see the selection of items from the Green Collection now on display in the Passages exhibit

One of the most moving sections of the exhibit, for me, are the cases of Hebrew scrolls in the first room. These scrolls, of the Torah and of Esther

, were meticulously created and maintained from generation to generation. They are frequently accompanied by beautiful and exquisitely crafted cases. Several scrolls on display came through the Spanish Inquisition and others survived the Nazi holocaust. Standing before these amazing Hebrew scrolls, I felt an overpowering sense of the presence of a cloud of witnesses preserving the Word of God through the generations in the face of all the world’s darkness. Multiply that times 10 – the “Synagogue” is but one of 11 rooms in the exhibit – and you have the impact of seeing Passages.

Here are three options for planning your visit, with the time requirements for each:

The audio descriptions are informal recordings by Director Scott Carroll in which he points out features of the objects on display to examine more closely, and tells stories about the items, including their provenance and scholarly significance. Think of these delightful recordings as “fireside chats” or “conversations with the curator.” Carroll’s excitement over each object shines through these extemporaneous recordings with contagious delight, and conveys the motivation that compels a curator to learn so many languages and invest a lifetime in academic study of rare, historic artifacts. These audios include riveting stories and historical background. For example, don’t miss the audio description of the Codex Climaci Rescriptus, mentioned above. The Dead Sea Scrolls audio summarizes much of what you need to know to appreciate the Genesis fragment on display. Audio #1303 ranges from the Coptic origins of monasticism to a moving story of the first known codex (book). Audio #1601 describes how an English translation before Wycliffe, made for some Cistercian sisters, traveled through time to become incorporated word-for-word in some passages of the King James Bible in 1611. Audio #2602, describing Erasmus’ diglot of 1521, recounts the story of Luther’s reading of Romans 1 in Greek and how that text differed from the Latin Vulgate. The audios offer many more such stories about the items, their background, provenance and significance. I highly recommend listening to as many audio clips as you have time for.

To help you pace yourself, print off a copy of this exhibit overview

, which lists the 11 rooms of the exhibition. But don’t hurry – even the first two rooms, the Synagogue and Monastery, are by themselves worthy of a full day’s attention. To enjoy the wealth of material, plan ahead. As Rick Steves says, “Expect to return!”

A printed guide to the exhibition is available in the Museum gift shop for $25. It features descriptions of 100 items, often similar to the content of the audio recordings, accompanied by large full-color photographs. It’s a bargain if you want a place to keep notes, a way to keep track of some of what you’re viewing in the exhibit, or a prompt for discussion and sharing of your exhibit experience over lunch in the cafe. I highly recommend getting a copy on your first visit (or reading it over lunch even on your first day); it will help you make more efficient use of your time during your next visits.

. Parking is $10/day on weekdays in a lot on the north side of the Museum (plastic accepted).

are required; if you want to listen to the audios, get the multi-day discount.

No ticket is required, however, to attend the free Passages Speaker Series, which begins this week at the Oklahoma City Museum of Art and runs on intermittent Tuesday nights for several months. The exciting line-up of speakers is listed below, with links to some of their books. I plan to make every lecture, but if you miss a lecture, DVDs of the talks will be made available, so monitor the website for details.

“While movies like National Treasure, The Da Vinci Code and Indiana Jones tell of quests for fictional treasures, the real-life treasure hunters of the Green Scholars Initiative are uncovering new scientific mysteries in ancient biblical texts and manuscripts. The public will now get the rare opportunity to hear directly from these world-class experts at no cost.” – Jerry Pattengale, Director, Green Scholars Initiative

Seating is very limited, so call ahead to reserve tickets. To choose a decent seat, plan to arrive no later than 6 p.m. Act soon: Tickets for every week can be reserved now, and will not last long.

For more information about each of these speakers see the official schedule: Passages Speaker Series.

UPDATE: The Museum Gift Shop now carries DVDs of the speakers, which include privately-recorded conversations with each scholar, and the Passages Exhibition Catalog ($25). Reading the catalog beforehand can make it easier to absorb all the information in the audio narrations, and even provide an ideal place to take notes as you go through the exhibit.