“Give us, O God, the vision which can see Your love in the world in spite of human failure. Give us the faith to trust Your goodness in spite of our ignorance and weakness. Give us the knowledge that we may continue to pray with understanding hearts. And show us what each one of us can do to set forward the coming of the day of universal peace.” – Frank Borman In a historic broadcast on Christmas Eve, aired live from lunar orbit, the three astronauts took turns reading aloud the first chapter of Genesis while the world beheld for the first time the sight of the Earth as it appears from deep space. NASA estimated that as many as a billion people watched on television or listened on the radio (“Christmas in the heavens

“). On Christmas Eve, why not listen to the audio or watch the video again with your kids? NASA has made clips available here: Apollo 8 Christmas Eve broadcast

. The world’s first view of the Earth from space was a breathtaking event!

Frank Borman read the Christmas blessing, quoted above, on Christmas Day. Robert Zimmerman recounts these events in Genesis: The Story of Apollo 8

A month earlier, just before Borman had left for Florida, he attended Sunday church services at his local parish, St. Christopher’s Episcopal Church in League City, Texas. As one of the church’s lay readers who routinely read aloud to the congregation during church services, Borman had planned to participate in the Christmas Day services. When NASA made the sudden decision to send Apollo 8 to the moon, he found he had to explain why he couldn’t be there….
Now Borman sheepishly added, “I was supposed to lay-read tonight, but I couldn’t quite make it.”
“Roger,” said Collins. “I think they understand.”

The story of how Borman came up with the Christmas blessing

, an excerpt from Zimmerman, makes a great family read-aloud.

Borman’s Christmas prayer for divine blessing in spite of human failure and weakness was poignant and timely. 1968 witnessed the assassination of both Robert F. Kennedy

and My Lai massacre

made headlines that year in the escalating Vietnam war

. And the race for the Moon itself manifested cold war tensions between the USA and Soviet Union.

In this light, Anders began the reading of Genesis with an inclusive message, to signify the astronauts’ intent that the striking photo of the Earth from space is “For ALL the people on Earth….” Soviets as well as Americans. Rich and poor. Slave and free.

As a Christian, I would echo the angelic proclamation that the good news of Christmas is for all humanity:

“And the angel said to them, “Fear not, for behold, I bring you good news of great joy that will be for all the people.” (Luke 2:10)

Jesus came to reconcile all things in heaven and earth (Col 1:20

). The humanity which God took upon himself in the Incarnation is the very same human nature that is shared by us all. Russian and American – or for that matter, Asian, European, African, Australian, or even Martian. Jews, Muslims, Christians, Buddhists, agnostics and atheists. Rich and poor. Slave and free. Working and unemployed. Republicans and Democrats. Strong and weak. Well and ill. Of sound mind and mentally disabled. Hungry, cold and naked, or warm, well-fed and clothed. God sought us out to become one with us in our low estate, alienated and without hope in the world. Just as no national boundaries remain visible from space, so there are no distinctions within the human nature assumed by God in Christ – no creature under heaven is excluded from the proclamation that God has taken our flesh upon himself. God with us in Immanuel is a proclamation of joy to the world that applies to all humanity and even the physical cosmos: nothing in human history or physical creation remains untouched by the union of God with human flesh. God in the manger is a sign to us of the absolute determination of God to transform the entire cosmos, recreating it from the inside out, in love and justice to establish a peace that will never end (Isaiah 9:6-7

Regardless of our particular national or geographical place of origin, religious tradition or ideological affiliation, the effect of viewing the Earth from space prompts us to reflect upon the place of humanity in the universe. This is why the reading of Genesis and the Christmas blessing had such a profound impact on those who listened. Down through the years, now more than four decades hence, may it again prompt us to ponder anew the mystery of Immanuel, and to work, in love and justice, for peace across all that divides us. 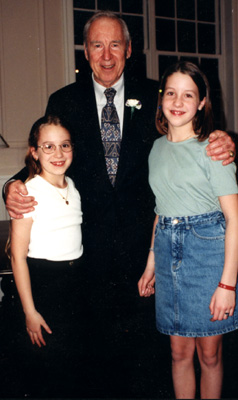 Hannah and Rachel with Jim Lovell

.
Links to visit together: how Borman came up with the Christmas blessing