This Darwin 2009 video (m4v, mp4, download) explains that the OU History of Science Collections is one of the handful of places in the world where one may view a complete set of first editions of the works of Charles Darwin. As curator, I was eager to recognize 2009 as the 150th anniversary of publication of Darwin’s Origin of Species (1859) and the 200th anniversary of Darwin’s birth. To celebrate this occasion and to encourage discussion of Darwin’s significance, I invested a large amount of effort in several projects, including:

In addition, continuously throughout the year, I offered countless tours of the Darwin collection; gave presentations to area civic, church and educational groups; and engaged in discussions with students in various formal and informal settings. Obviously, there was no time last year to create this blog, but if I had, it would surely have seen a great number of Darwin-related posts (to which perhaps I’ll have opportunity to return sometime in the future).

Yet from time to time I am asked how evangelicals can approve of, or be attracted to, the Darwinian theory of evolution. Without here entering into the myriad of issues involved, I nevertheless want to list some resources I recommend as great starting points for thinking through evangelical perspectives on an evolving creation:

The sources listed above are not in any way meant as the last word, nor as a review of current publications in the history of science and religion, but in my opinion, they do collectively offer a sound starting point for any evangelical wishing to begin to think through these issues.

In conclusion, in answer to the bumper sticker shown above, here’s what the rear of my 1986 Subaru Brat looks like: 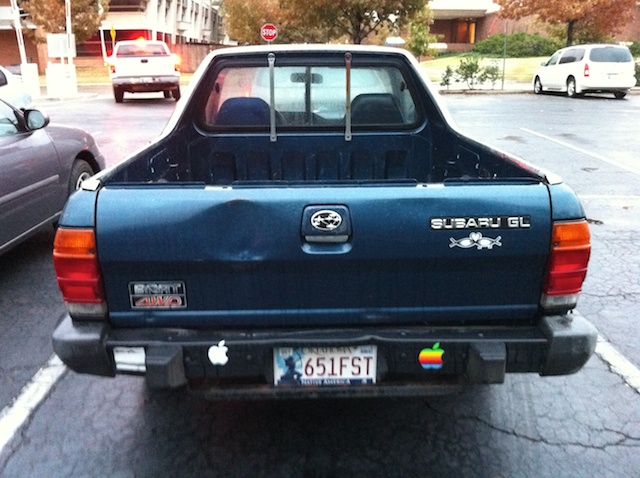 Above the two Apple decals, beneath the “Subaru GL,” there’s a “fishconciliation” magnet:

Whether parked at church or university, onlookers are likely to be perplexed and astonished by one fish or the other.

3 Responses to Evangelicals and Evolutionary Creation