Christmas gifts: You are a meteorite

Update 2022: Meteorite fragments I’m giving out this year are pieces from the largest group of meteorite fragments ever found — more than 100 tons have been recovered so far from this single fall, which created a field of more than 26 craters known as Campo Del Cielo in the Chaco Province of Argentina, about 4,500 years ago.

I’m terrible at choosing gifts. Some people (especially God, and my sister Laura) have a special knack for choosing gifts that are meaningful to the recipient while at the same time they reflect the relationship of the giver. When that happens, the exchange of a gift is a joyous event. My gift-giving, on the other hand, seems more often than not an awkward transaction, despite my delight in giving. For example, most people, most of the time, when they are receiving a gift from me, get a book. Or sometimes several books. That fact alone epitomizes my relative inability to get beyond myself to give a gift whose nature reflects the recipient more than myself.

The most telling example took place one year when I was rather too old for it to be excusable, but I gave my Mother a huge, warehouse-sized case of toilet paper. In my defense, it might be noted that this was long before Sam’s or Aldi’s made the acquisition of such a treasure a rather common occurrence. But even with that noted, there’s little to be said in my defense. At the time, I naively thought it would lift a burden off her shoulders. In my mind I was thinking that shopping for all that toilet paper must be a heavy chore, and I could get it out of the way for her at the start of the new year. Yet, once the deed was done, for some reason I did not experience as much joy in the giving of the gift as I had anticipated.

Last year, however, for the first time (and possibly the last), I did feel like I hit upon a gift that was possibly nearly as meaningful to others as it was to myself: genuine meteorite fragments. Meteorite fragments may be had from a variety of rock and mineral resellers. I purchased several dozen from Ikon Mining & Exploration Company

. On her blog, Laura described how my nieces and nephews received their meteorites. Click the image below to view a 3-minute video: 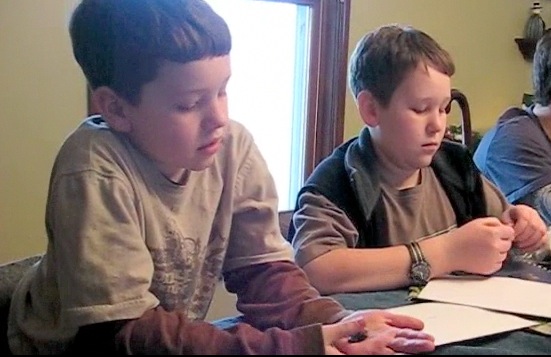 As she mentions in her post, the meteorite specimens were accompanied by a set of reflections. At Christmas we celebrate the Divine Meteorite, God come down from heaven to earth. And each of us, also, is an extraordinary, heaven-sent meteorite, no matter how ordinary we may feel. You are a meteorite. Here’s the booklet (click to download pdf): 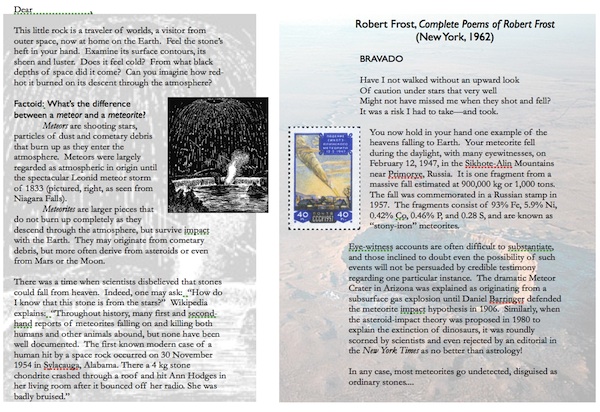 Be forewarned: Unfortunately, this year I don’t think I can top the meteorite. That was my one good gift idea to last my lifetime, a bolt from the blue. Lightning doesn’t strike twice. I’m back to my own resources now, so this year expect books or toilet paper.

Update: For Christmas 2010, our gift to nephews and nieces was copal, a hardened form of resin that, over time, becomes amber. Here’s the pdf description of copal (2.6 MB) that we distributed with the gift, which considers several analogies between copal/amber and the young people receiving the gift (made in time, unique as Madagascar, idiosyncratic inclusions, a pleasant aroma, electrifying and light-bearing, and to be handled gently with great care). 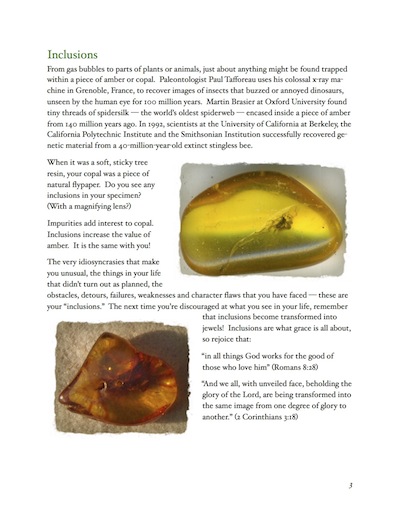 13 Responses to Christmas gifts: You are a meteorite