After our Advent Celebration this year, Candace suggested I rewrite the section on the magi. What we have used all through these years is a nod to the folklore of the magi, with a long quotation from Longfellow and the imagery of “We Three Kings.” Since it would be more appropriate for a lessons and carols celebration to emphasize the meaning of Matthew’s text, I’ll use this post as a scratchpad to work up a reading on the magi that we might use to replace the section on the magi in our Advent Celebration next year.

Here’s a printable version of the reading below. 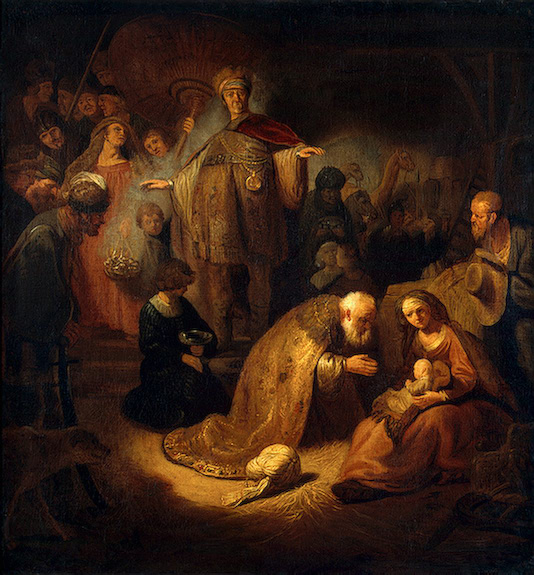 Rembrandt, Adoration of the Magi

Lessons and Carols excerpt for the magi

—
Daniel, the head of the magi in Babylon, recorded a vision of the coming King of Kings:

In my vision at night I looked, and there before me was one like a son of man, coming with the clouds of heaven. He approached the Ancient of Days and was led into his presence. He was given authority, glory and sovereign power; all peoples, nations and persons of every language worshiped him. His dominion is an everlasting dominion that will not pass away, and his kingdom is one that will never be destroyed. (Daniel 7:13-14)

“I have been an arrogant fool, young one. I have boasted all my life of being a seeker of truth—I, always me. When I saw that star I knew in an instant… that star is an invitation. You see, Wisdom is seeking us. And He has sent that star as an invitation to come to Him, yes Him.”
Then the old man’s entire frame shuddered, as a tear glided haltingly down his cheek and was lost in his beard.
“All my life He has been seeking me. He is the one who has given to me and to you our hunger for him. And now this star is a precious gift. I have sold all that I have for the journey and for gold to offer when I meet Him… Tonight I leave.”

Now after Jesus was born in Bethlehem of Judea in the days of Herod the king, behold, wise men from the east came to Jerusalem, saying, “Where is he who has been born king of the Jews? For we saw his star when it rose and have come to worship him.” When Herod the king heard this, he was troubled, and all Jerusalem with him. (Matthew 2:1–3)

Herod the Great “had made will after will and was now in a fatal illness and fury over the question of the Magi. He showed his excitement and the whole city was upset because the people knew only too well what he could do when in a rage over the disturbance of his plans.” (A.T. Robinson, Word Pictures in the New Testament (Baker, 1930), vol. 1, p. 17.)

Assembling all the chief priests and scribes of the people, Herod inquired of them where the Christ was to be born. They told him, “In Bethlehem of Judea, for so it is written by the prophet:

“‘And you, O Bethlehem, in the land of Judah, are by no means least among the rulers of Judah; for from you shall come a ruler who will shepherd my people Israel.’”

—
Religious experts knew where the Messiah was to be born, yet not one bothered to make the short six-mile journey to Bethlehem to discover the Messiah for themselves.

Then Herod summoned the wise men secretly and ascertained from them what time the star had appeared. And he sent them to Bethlehem, saying, “Go and search diligently for the child, and when you have found him, bring me word, that I too may come and worship him.” After listening to the king, they went on their way. (Matthew 2:7–8)

“But why was Jerusalem troubled? Surely the prophets had foretold him as the Savior, Benefactor and Deliverer who would come from above… Although troubled, they nevertheless did not try to understand what was happening. They did not follow the wise men or even take any particular notice. To this extent they were… careless.” (John Chrysostom, 4th cent.)

And behold, the star that they had seen when it rose went before them until it came to rest over the place where the child was. When they saw the star, they rejoiced exceedingly with great joy. And going into the house they saw the child with Mary his mother, and they fell down and worshiped him. Then, opening their treasures, they offered him gifts, gold and frankincense and myrrh. (Matthew 2:9–11)

“A boy he is, but it is God who is adored… The Son of God, who is God of the universe, is born a human being in the flesh. He permits himself to be placed in a manger, and the heavens are within the manger. He is kept in a cradle, a cradle that the world cannot hold… Thus he is the One, the God of Glory and the Lord of majesty, whom as a tiny infant the magi recognize.” (Chromatius, ca. 400)

Angels from the realms of glory
Wing your flight o’er all the earth,
You who sang creation’s story
Now proclaim Messiah’s birth.

“they rejoiced exceedingly because they had not been deceived in their hope… By the sign of the star they understood that the birth of the King was revealed to them by divine authority. Through the mystery of the star they understood that the dignity of the King who was born exceeded the measure of all earthly kings. For it was inevitable that they considered this King more glorious than the star, which devotedly paid homage to him…. If then they had been seeking a king of this world… they would have undertaken the effort of so great a journey for nothing. Yet because they were seeking the heavenly king, even if they saw nothing regal in him, they were nevertheless delighted, content in the testimony of the star…. They adored him and returned home.” (Anonymous early commentator)

—
An amazing wonder lies inextricably at the heart of this story, that magi from afar should seek out the obscure birth of one of the poorest families in all Israel. The wise still seek him, but who was doing the seeking?

—
Wisdom consists in recognizing that the One who drew the wise men to Himself also draws us. God goes to extraordinary lengths to bring us to him.

And being warned in a dream not to return to Herod, they departed to their own country by another way. (Matthew 2:12)

“As they were advised to take another way, so are we.” (Gregory the Great)