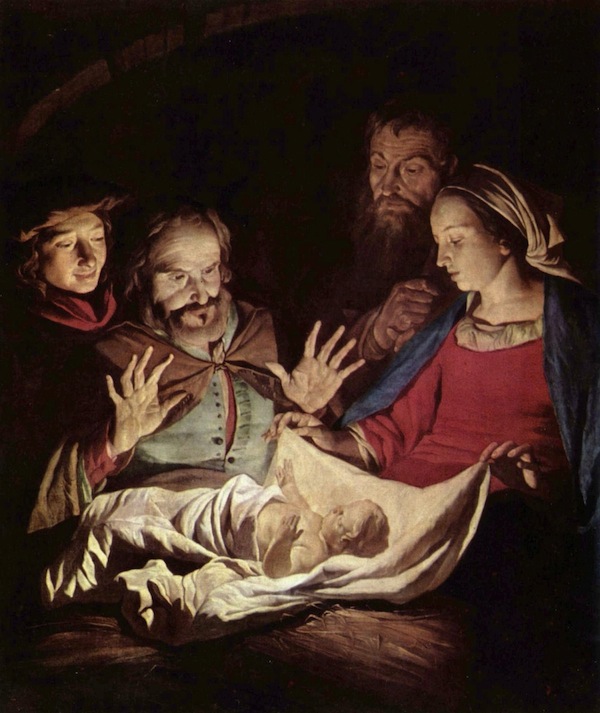 Adoration of the Shepherds, by Matthias Stomer

In Adoration of the Shepherds, the 17th-century Dutch painter Matthias Stomer captured the wonder of the first witnesses to the birth of the Lamb of God who takes away the sin of the world. Shepherds were the homeless of the day, the outcast, the despised, the forgotten, the lowest of the menial classes, and yet they were the ones chosen to receive the angelic message of good news and peace for all humanity. God is Immanuel, God is with us – shepherds were included in his coming, and so are we.

“It is good that somewhere in the world there are men who realize that Christ is born. There were only a few shepherds at the first Bethlehem, and it is the same now. The ox and the ass understood more of the first Christmas than the high priests in Jerusalem. And it is the same today.”

Thomas Merton, “Christmas in the Monastery” (in Eerdmans’ Book of Christian Classics)

“Now there were shepherds nearby living out in the field, keeping guard over their flock at night. An angel of the Lord appeared to them, and the glory of the Lord shone around them, and they were absolutely terrified. But the angel said to them, “Do not be afraid! Listen carefully, for I proclaim to you good news that brings great joy to all the people: Today your Savior is born in the city of David. He is Christ the Lord. This will be a sign for you: You will find a baby wrapped in strips of cloth and lying in a manger.” Suddenly a vast, heavenly army appeared with the angel, praising God and saying, “Glory to God in the highest, and on earth peace among people with whom he is pleased!” When the angels left them and went back to heaven, the shepherds said to one another, “Let us go over to Bethlehem and see this thing that has taken place, that the Lord has made known to us.” So they hurried off and located Mary and Joseph, and found the baby lying in a manger. When they saw him, they related what they had been told about this child, and all who heard it were astonished at what the shepherds said. But Mary treasured up all these words, pondering in her heart what they might mean. So the shepherds returned, glorifying and praising God for all they had heard and seen; everything was just as they had been told.” (Luke 2:8–20 NET)

Do:
Set up the nativity – the Bethlehem stable – with farm animals. Set up shepherds with their sheep across the room somewhere. When Christ is born they will come to visit him.

If possible, visit a farm, zoo or a “live nativity.”

Sing:
The Friendly Beasts
Away in a Manger (*see note below)
The First Noël
While Shepherds Watched their Flocks by Night
Rise up Shepherd and Follow
Come Leave Your Sheep

*Note on Away in a Manger:
We correct the line of Away in the Manger that says:

“The little Lord Jesus, no crying he makes.”

This line diminishes the humanity of Christ, so we change it to:

“The little Lord Jesus, what a squalling he makes.”

This latter phrase is more consistent with Christ’s coming to share our place as Immanuel, and with his assumption of our human nature. The Incarnation is the central mystery of Christian faith and the wonder of Christmas. To sing Away in the Manger with children using this correction offers a wonderful opportunity, not to be missed, for engendering family theological reflection and discussion. 🙂

5 Responses to Christmas reflections – the Shepherds