If you face east from your front yard, or say, from within the circle of Stonehenge, then on different dates through the year you will see the Sun rise at points running north or south of due east as shown below. The position of the Sun changes its rising point along the horizon almost like a pendulum swinging back and forth. The two days each year when sunrises and sunsets reach their extreme northerly and southerly positions are called solstices, which literally means that the Sun seems to “stand still” on the horizon as it turns to head back the other way.

Horizon locations of sunrises between summer and winter solstices, at Stonehenge
(Azimuth 90° = due east)

I rejoice at both summer and winter solstices: 24 and 1/2 years ago, Candace and I were married on the morning of summer solstice. Therefore, despite the relentless glare of the sun beating down upon us in the heat of summer, I rejoice at this anniversary with appreciation of the natural rhythms of the Sun, Moon and Earth. 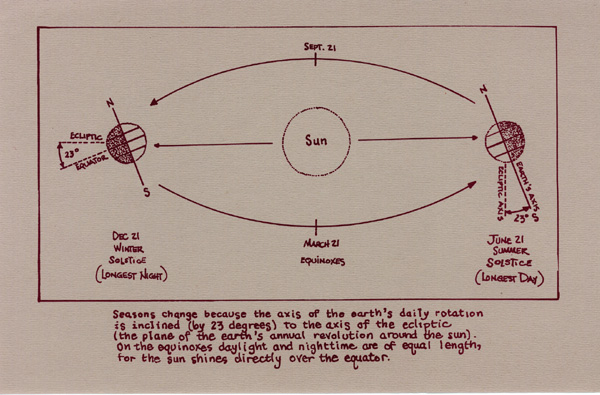 Summer and winter solstices: a modern explanation, from our wedding bulletin (1986)

But where summer solstice is dear to my heart for extrinsic reasons, winter solstice has its natural attractions…. light, stars, Moon and snow, for starters.

LIGHT. Winter solstice occurs around December 21 or 22, when the Sun reaches its most southerly extreme in the sky. Although others unimaginatively characterize winter solstice as the “bleak midwinter,” I love the oblique angle of sunlight with its rich hues and long shadows, and the lack of glare throughout the day. These are the most subtle sunrises and sunsets of the year. 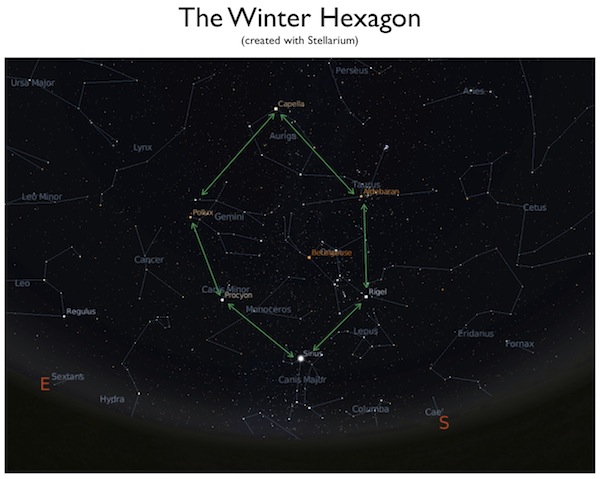 To become familiar with the stars of winter (or any season),
I recommend Chet Raymo, 365 Starry Nights

SNOW. Yesterday the temperatures were in the 70’s here in Norman, and I was afraid that in disgrace they were going to call off the solstice. But it went forward anyway, thankfully, and with the start of winter, there is the promise of snow.

MOON. Another reason to rejoice at winter solstice is that the Full Moon is the most beautiful of the year. On any Full Moon night, the Moon is visible all night long. Also, on any Full Moon night, the paths of the Sun and Moon across the sky are complementary: when the Sun is lowest, the Moon is highest. So winter Full Moons are loveliest, and on the night of the Full Moon nearest the winter solstice, the Moon travels its highest path across the sky. You can see well enough even in the middle of the night to walk across an unknown field at a normal pace. Each blade of grass is visible, or better yet, each drift of snow.

’Twas in the moon of wintertime,

When all the birds had fled,
That mighty Gitchi Manitou
Sent angel choirs instead;
Before their light the stars grew dim,
And wondering hunters heard the hymn:
Jesus your King is born,
Jesus is born,
In excelsis gloria.

Last night there was a rare treat: the Full Moon coincided with winter solstice, so it was as bright and high as could be, located just above the shoulders of Orion the Hunter, amidst the Winter Hexagon. And more than that, in a once-in-a-lifetime experience, there was a lunar eclipse on the very night of winter solstice. The Moon turned a beautiful reddish color as it entered the shadow of the Earth. The eclipse was total for about an hour from 1:40 to 2:30.

Hannah and Susanna stayed up most of the night watching Christmas movies, going outside periodically to observe the eclipse. Candace and I just woke up during totality, stumbled outside to see it (beautiful!), and then tumbled back into bed.

We did observe one of Aristotle’s arguments for the sphericity of the Earth: during a lunar eclipse, the Earth’s shadow on the Moon is always curved (top row, below). If the Earth were any other shape (below, lower three rows), some time or other its shadow would be angular. Therefore, one didn’t have to circumnavigate the globe to know that the Earth is round, and the mistaken idea that Columbus faced opposition from flat-earthers is a modern myth. Stars are the most beautiful but not the only lights of Christmastime. Earlier last night, we drove around looking at terrestrial Christmas lights. Although other family members have seen it before, this was my first visit to the Downs home

, not far from ours on the east side of Norman. This family goes all out, and we spent about an hour enjoying the show, which synchronizes the lights on their home and across their land with the music of five Christmas carols. You’ve got to watch the videos

to see how amazing this is! As you approach their location

, the Downs accept donations of canned food for the Regional Food Bank of Oklahoma, and so far this year they’re on pace to surpass last year’s raising of over $17,000 to provide over 130,000 meals.