Storytelling and The Lord of the Rings

Songs are the very soul of The Lord of the Rings.

Traveling often recalls my mind to that masterwork of the journey, J.R.R. Tolkien’s Lord of the Rings

. On a recent trip, therefore, I listened to the excellent BBC dramatization of all three titles prepared by Brian Sibley: Fellowship of the Ring

, and Return of the King

. Decades ago I treasured a little wooden crate filled with cassettes dramatizing The Hobbit

, likewise produced by the BBC, and so I was looking forward to listening to these LOTR dramatizations with nostalgic anticipation. As the miles went rolling by, I was by no means disappointed.

I have much to learn from the imaginative perception of others, so I am one who welcomes multiple interpretations of The Lord of the Rings, whether through songs, paintings, films or audio dramatizations (like the BBC production

Janet Croft and others

. Most obviously, despite the extended length of Jackson’s trilogy, the screenplay had to be immensely compressed. Thus the movies eschew the patient plodding of Tolkien’s narrative, as it recounted long journeys experienced at a walker’s pace. In this respect as well as others, movies, like any dramatization, are interpretations, pointers and tributes to, rather than replacements of, the original work. Nevertheless, I was pleased that Jackson’s films took their visual aesthetic in large part from the paintings of Alan Lee

. More than that, I rejoiced that a new generation encountering Tolkien for the first time would be drawn into a lifetime of reading the books for themselves.

What I most missed from Jackson’s films, however, were the songs.

Make no mistake – I love the soundtracks to all three films. The final songs – May It Be

by Enya and Into the West

by Annie Lennox – are profoundly moving. On my office wall I keep a translation into Quenya of the latter’s lyrics produced by Rachel, who delighted Candace and me one evening by coming down from her bedroom (where she had been ensconced translating it) to sing it for us. Billy Boyd’s rendition of The Steward of Gondor

is a haunting epitome of lamentation. A video extra devoted to the music of Rohan, found on the extended edition of The Two Towers, demonstrates the producers’ detailed attention to the distinct musical tradition of each place. Who could forget the themes of Rohan, Hobbiton or Rivendell? Remove the music and there would be no films. I regard the soundtracks of the films as equally successful as the Alan Lee visual aesthetic.

Yet, still, something more elusive is missing by nature from a cinematic film. It has to do with the way songs and poetry and storytelling were meant to be a way of life. Inevitably, the domination of the visual image over the spoken word and the rapid pace of the movies transposes the songs and the telling of tales from the foreground into the background. Instead, action is everywhere prominent. A telling question: Do we witness the lead actors singing more often than fighting? In some places, perhaps, but more often lore and storytelling become merely implicit. The songs occur with high production value rather than forming the matrix of daily life. This sadly reflects our general cultural shift from social music-making to the consumption of music as a commodity.

Yet it struck me while listening to the BBC dramatizations, rather, that characters frequently burst into song and launch into storytelling. This was an unexpected delight. Curiously, Tolkien’s songs (set to music by Stephen Oliver

and sold as an accompanying soundtrack

) appear in the dramatization despite its similar length: only 13 hours for the BBC dramatizations vs. 11 hours and 22 minutes for the Jackson extended editions. For one accustomed to the movies, all that singing is recurrently refreshing, and makes the dramatizations more faithful to the feel of the books. All this points to the meaning of The Lord of the Rings, the importance of the spoken word, and the imaginative way of life Tolkien sought to recover.

Songs, poetry and storytelling are the heart and soul of The Lord of the Rings. In a captivating essay, “Tolkien’s Mythopoesis,” Kirsten Johnson explores how, through story, the imagination enables us to experience reality concretely, which reason alone could grasp only as a wraith-like abstraction. Through the story we gain delight, wisdom and strength on a far deeper personal level than we could ever experience from contemplating an abstract summary of the plot. Johnson explains:

“The book begins with a Middle-earth from which story is rapidly being lost. One of Bilbo’s distinguishing features is that he is both a story collector and a storyteller… The reason Frodo, Sam, Pippin and Merry are able to journey (Tolkien repeatedly reminds us) is because they have benefited from Bilbo’s love of stories and likewise love those stories…. Knowing and believing in elves, for instance, not only makes these hobbits somehow different from other hobbits but also causes them to look about with different eyes. In each place of rest and restoration along the journey, Tolkien makes clear that part of the essential nourishment that the hobbits receive is story – in word and in song, and even in picture.”
(Kirsten Johnson, Tree of Tales, p. 34.)

In this essay, published in Trevor Hart, ed., Tree of Tales: Tolkien, Literature and Theology

(Baylor University Press, 2007), Johnson explores the significance of songs and stories for Elrond (“greatest of lore-masters”), Gandalf, Aragorn, Celeborn, as well as the hobbits. The same meaning-making role of song and story could be shown in the lives of Arwen, Galadriel, Eomer, Gimli, Legolas and others. Johnson contrasts Boromir (who “cared little for lore”) with Faramir (“a lover of lore and music”):

“It is crucially significant to understand why [Faramir, when] given the opportunity to take the Ring is not even tempted. Here, I think, the film of the book fails us. For it is important to Tolkien that the reader understands that Faramir has truly learned … from ancient tales…. He is able to believe in things no man he knows has seen….” (Johnson, p. 36.)

Théoden laments, “Songs we have that tell of these things, but we are forgetting them, teaching them only to children, as a careless custom” (Johnson, p. 36). Tolkien conveys the significance of song and storytelling through the character of every major figure in the epic, for good or ill.

Regarding video interpretations of Tolkien, Jackson’s movies are neither the first word nor the last. I hope the next attempt will be a lengthy mini-series, where words will receive as much emphasis as deeds. To do this, each episode would need to feature a song sung, or a tale recounted, in a full, unhurried manner. As Gandalf chided Théoden: “Is it so long since you listened to tales by the fireside?” (quoted by Johnson, p. 36.)

Meanwhile, as a provisional countermeasure, I suggest that we movie-lovers listen to The Lord of the Rings soundtracks at least once all the way through for every time we watch one of Jackson’s films. More than that, between each film watching, spend several days listening to the J.R.R. Tolkien Audio Collection

and the Essential Tolkien

CD, in both of which Tolkien sings and reads his poems and stories. It would be a pity if lines from the films come more readily to mind than the original poems and songs of Tolkien himself, the greatest of lore-masters. 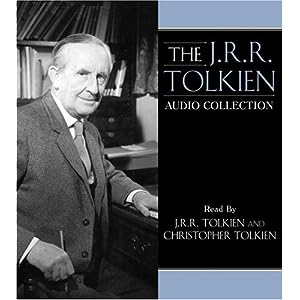 For deeper insights into these matters, read Johnson’s essay, as well as the other contributions to this excellent book, Tree of Tales, ed. Trevor Hart. Similar themes appear in Ralph Wood

, The Gospel According to Tolkien

on my recent trip. Wood is a most astute interpreter of Tolkien’s theological imagination. If you read just one book about Tolkien, I can’t think of any better. Chris Van Allsburg puts the meaning of music and storytelling in a nutshell in his illustrated storybook, The Wretched Stone

All these books whet my appetite to read The Lord of the Rings again, start to finish. So now that I’m by the fireside safely home, the real journey begins. 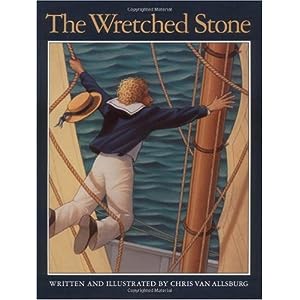 This entry was posted in Art-Music-Lit and tagged J.R.R. Tolkien. Bookmark the permalink.

3 Responses to Storytelling and The Lord of the Rings