Looking for a way to handle the whole Santa Claus thing without lying to your children, setting them up for disillusionment, or succumbing to rampant commercialism? If so, here’s our story, but be forewarned, it takes imagination, and to pull it off you might have to don a red suit and boots yourself!

When Candace and I were married, we were determined to sanctify the special character of Christmas and make it the most joyous time of the year for our children. Therefore we began to plan how to redeem Santa — how to put the St. Nicholas back into the Santa Claus. As a result, we came up with a strategy that, I’m happy to report, worked well for our three daughters. It’s not for everybody, but in case you’re curious, here’s what we did.

Every Christmas season, families with young children struggle with a question American culture presses inescapably upon us: How will we handle Santa Claus?

How do we connect the excitement of Santa Claus with the true joy of Christmas? (Or were they connected from the beginning?) 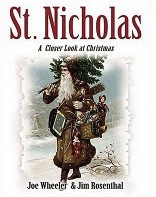 As most everyone knows, Santa Claus derives from the Dutch name Sinter Klaas, which is a form of St. Nicholas, a 4th century bishop from the town of Myra in Asia Minor. St. Nicholas was noted for his gift-giving to the poor. In the church calendar, December 6 became established as the Feast of St. Nicholas, to commemorate the generosity of Bishop Nicholas of Myra.

Bishop Nicholas suffered for his faith under the persecutions of Diocletian. One legend tells about three daughters of a poor family who were unable to marry because their father could not afford dowries. Bishop Nicholas heard about it, and secretly left a bag of gold coins at their house one night. The eldest daughter married soon after. Then he brought another bag of coins, and put it in a window one night; not long after, the next oldest daughter became happily married. Then he brought a third bag of gold for the youngest daughter’s dowry, but in order not to be seen by the wary father, he sneaked down the chimney and left the gold in one of the daughter’s stockings, which was hanging on a bedpost. But the father glimpsed the Bishop’s red robes as he left, and thus we have the story of St. Nicholas.

When our daughters were young, we celebrated St. Nicholas’ Feast on some evening early in the season, on or around December 6. After the meal we told them the story of Bishop Nicholas, and gave them each a gift in Santa’s honor. To help them visualize the story of St. Nicholas, we would dig up pictures

of a bishop’s red robes, of Father Christmas, Pere Noel

, and a variety of historic Santa figures

. We would read our old Little Golden Book edition of “Night Before Christmas

.” Nowadays two illustrated storybooks for telling the story of Bishop Nicholas are Dandi Mackall, The Legend of St. Nicholas

, or Julie Stiegemeyer, Saint Nicholas: The Real Story of the Christmas Legend

or Louise Carus, The Real St. Nicholas: Tales of Generosity and Hope from Around the World

. See also William Bennett, The True Saint Nicholas: Why He Matters to Christmas

Here are some additional ideas for celebrating the feast of St. Nicholas:

Celebrating the Feast of St. Nicholas accomplished several things: it diminished our overall focus on Santa by letting him have his day, getting him largely out of the way for the rest of the season. And more importantly, it enabled our children to associate the excitement of Santa and gift-giving with the story of a Bishop who gave gifts to poor children because of his love for the baby Jesus. When our children asked, “Is Santa real?“, our answer was, “Yes, and his first name was Bishop Nicholas.”

There came a year when each of our daughters would begin to put two and two together: Santa is Bishop Nicholas. Bishop Nicholas was a human like us. Bishop Nicholas lived a long time ago, and humans don’t live forever. So who is Santa Claus today? When they would ask that question, then at that point we were ready to introduce them to the “real” Santa Claus. We let them in on a secret: “Santa Claus today is none other than your own Grandpa Jack!” And then: “When we go to your grandparents’ home for Christmas, let’s try to catch him in the act – delivering presents and filling up the stockings!” Wow — what fun and anticipation they each had that year as we made our annual trek up to Missouri for Christmas break! There was absolutely no let-down about the Santas in stores or parades not being real, nor about Santa not living at the North Pole — what could be better than discovering that their very own Grandpa was the real Santa?

After we arrived, the excitement intensified: It was the day before Christmas. The girls discovered Santa’s black boots in a box left in the back bathroom! We could hardly wait to be on the lookout that night!

Here’s Rachel and Hannah catching Santa Claus in the act: 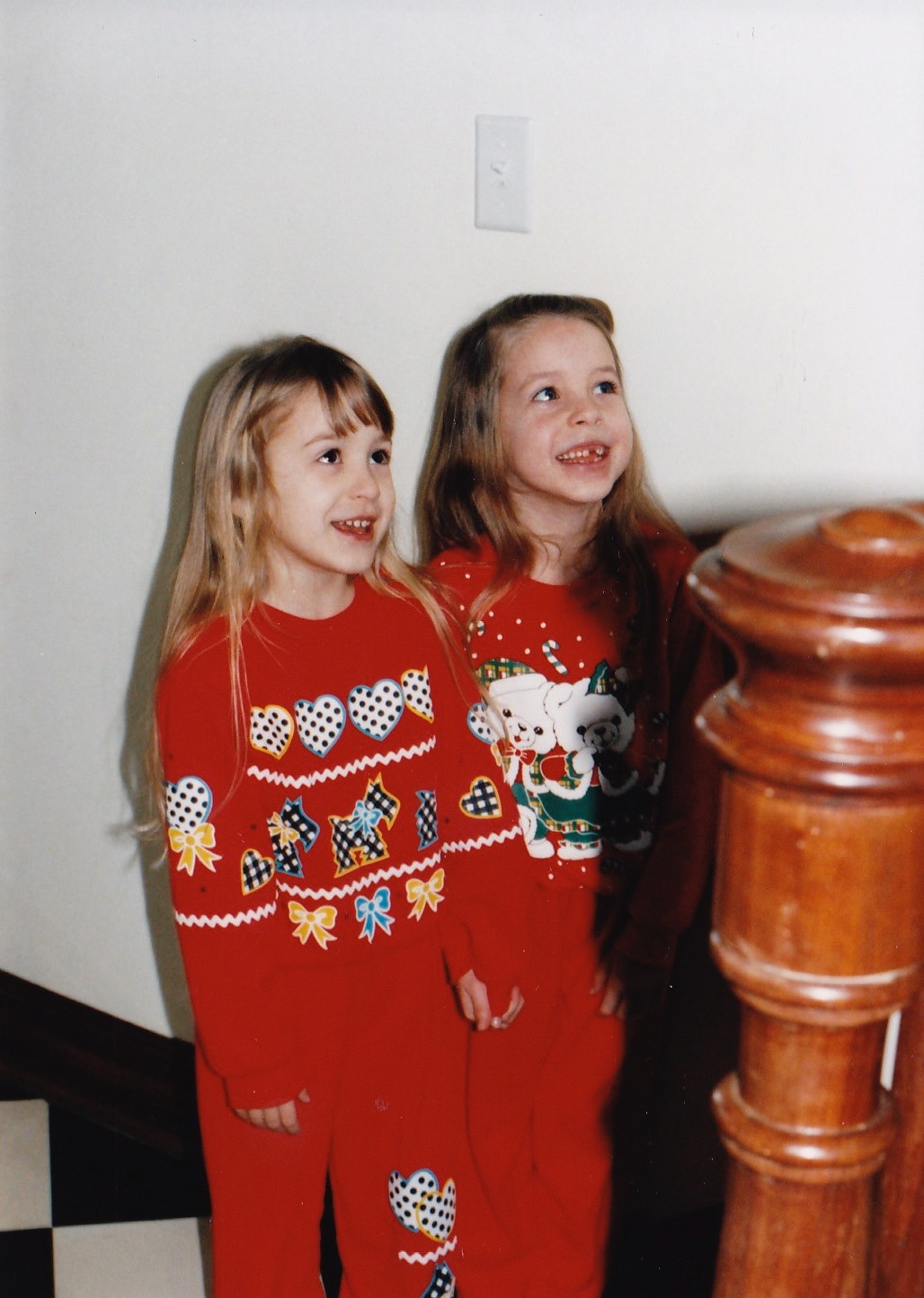 Here’s what they saw: 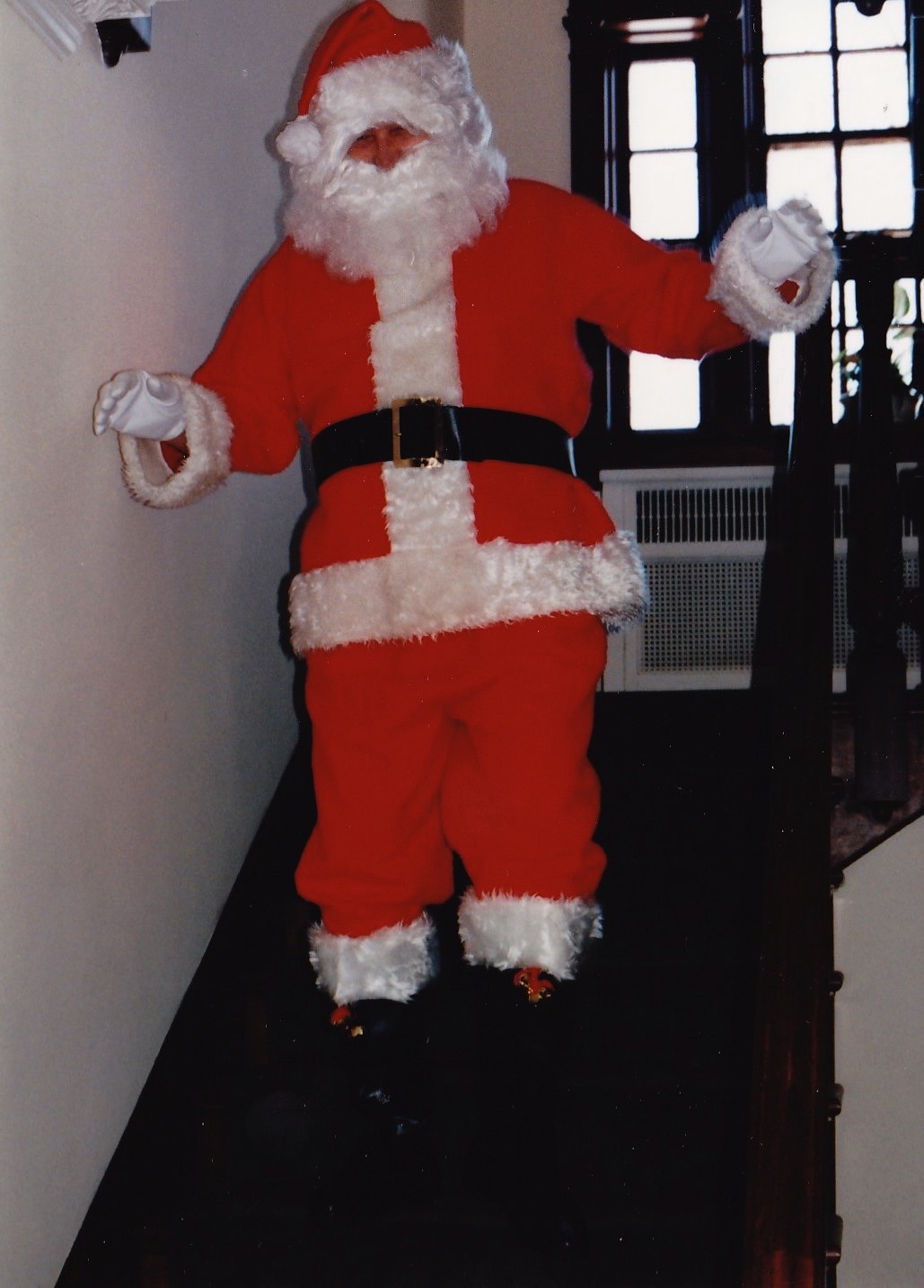 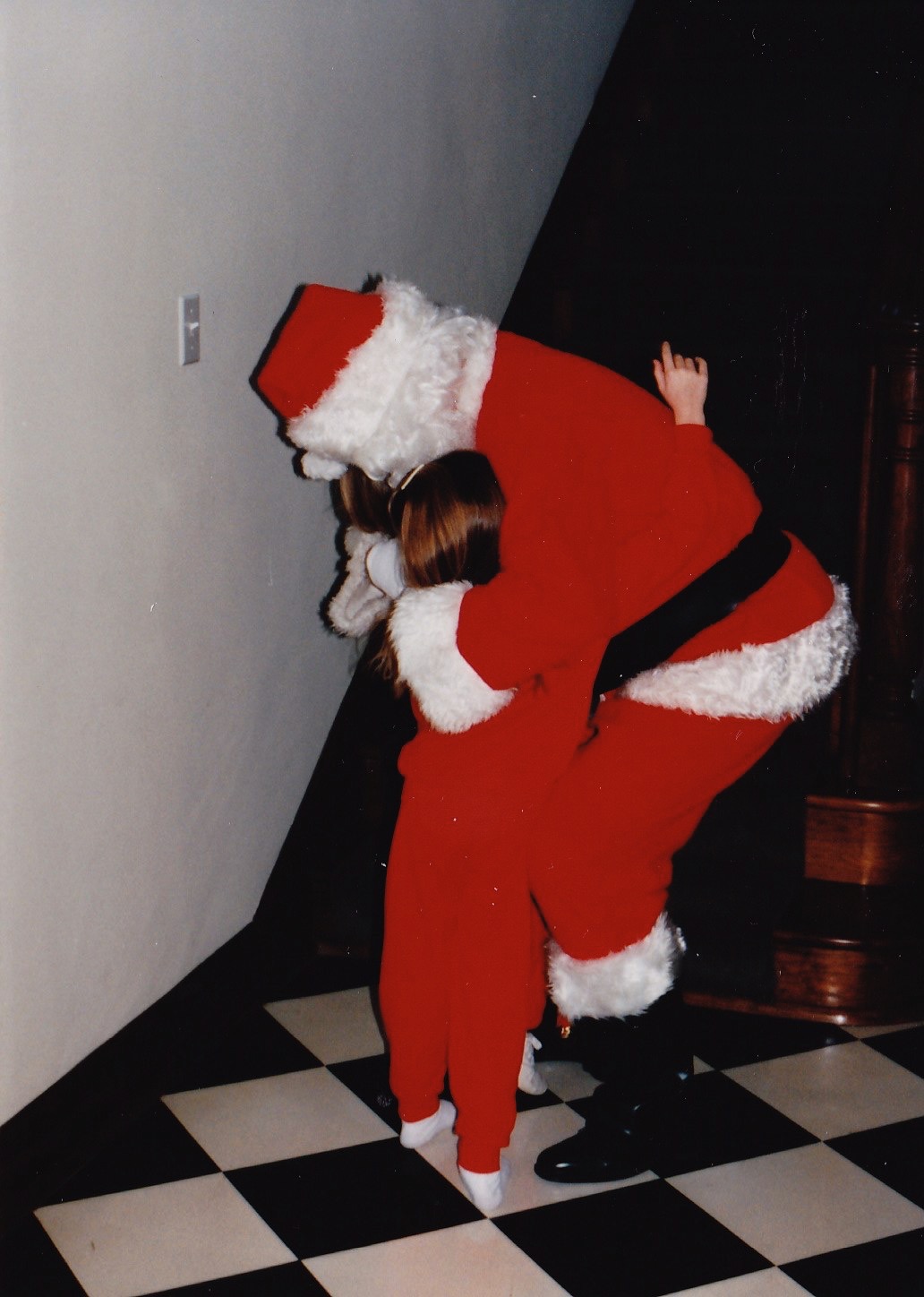 We know a secret! 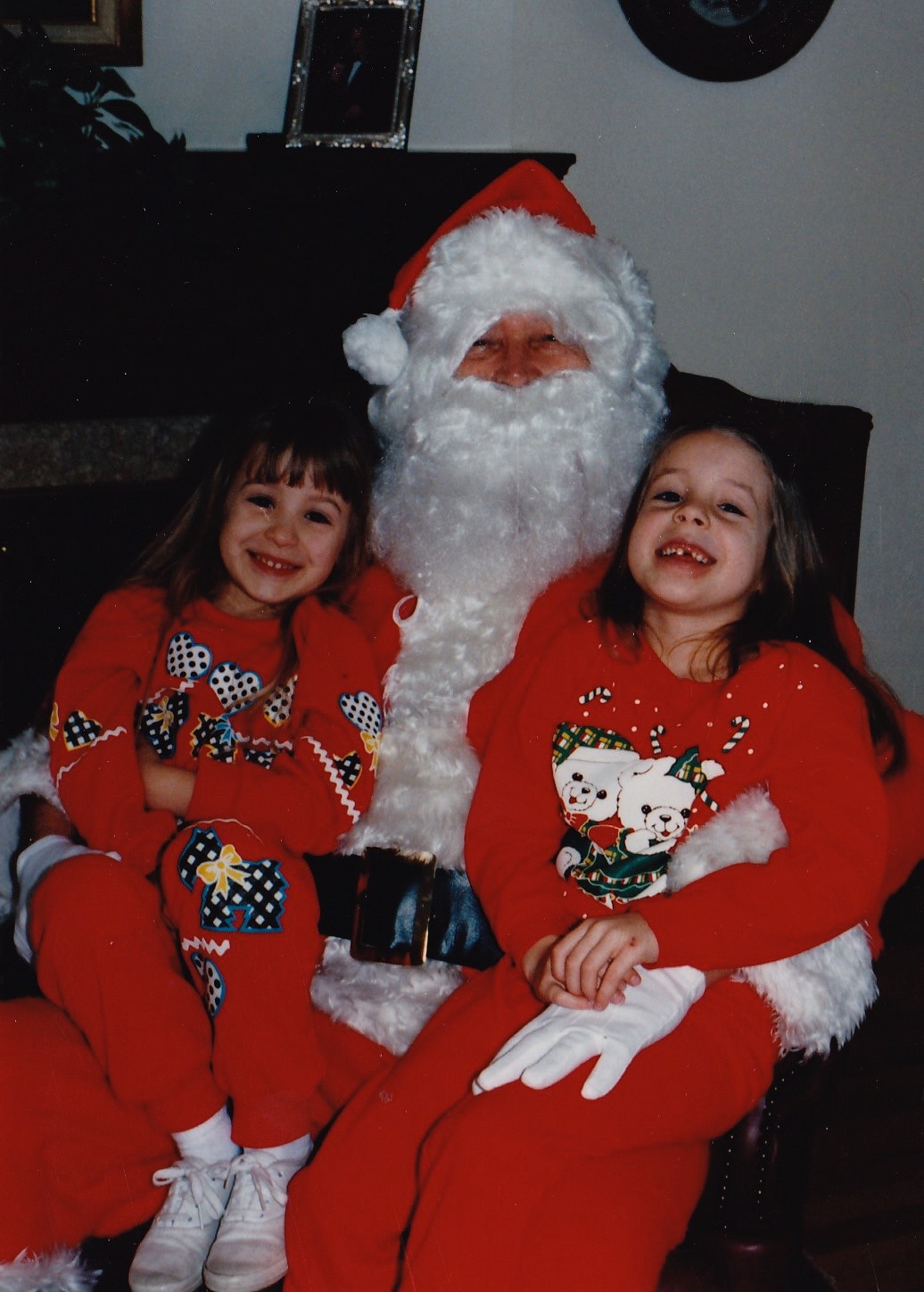 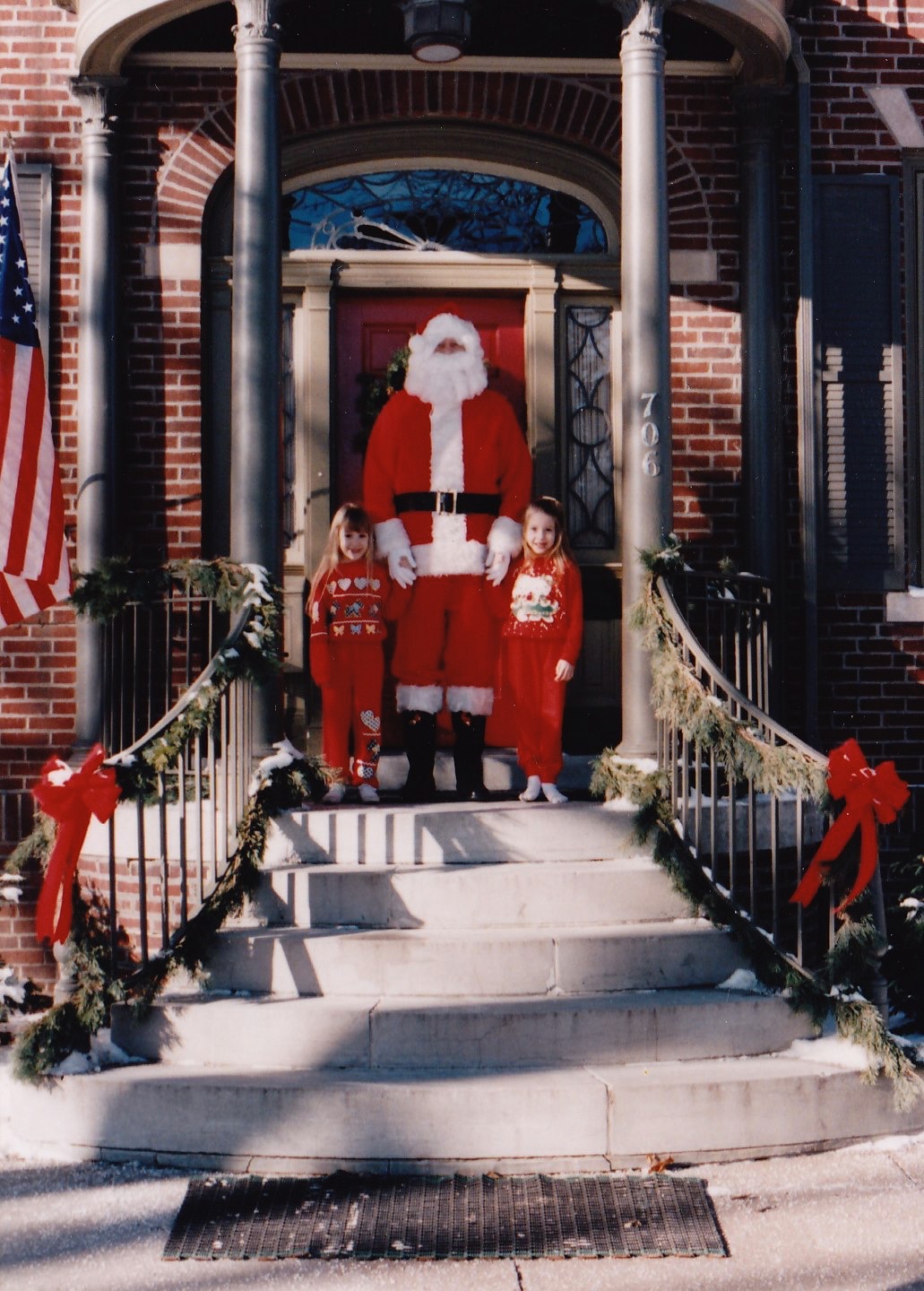 Stage 3: You can be Santa, too

Then the following year, each daughter was ready to ask, “Is Grandpa Jack the only Santa?” How could he make it all around the world? At this time, we would answer that in every generation, for nearly two thousand years, someone in each family follows Bishop Nicholas’ example. Right now it’s Grandpa Jack in our family, and in other families it could be fathers, mothers, grandpas, grandmas, aunts or uncles or a church or ministry who cares. “Someday you can be Santa Claus, too.”

In the next photo, Rachel and Hannah are older, and enjoying passing on a tradition as the younger cousins figure it out: 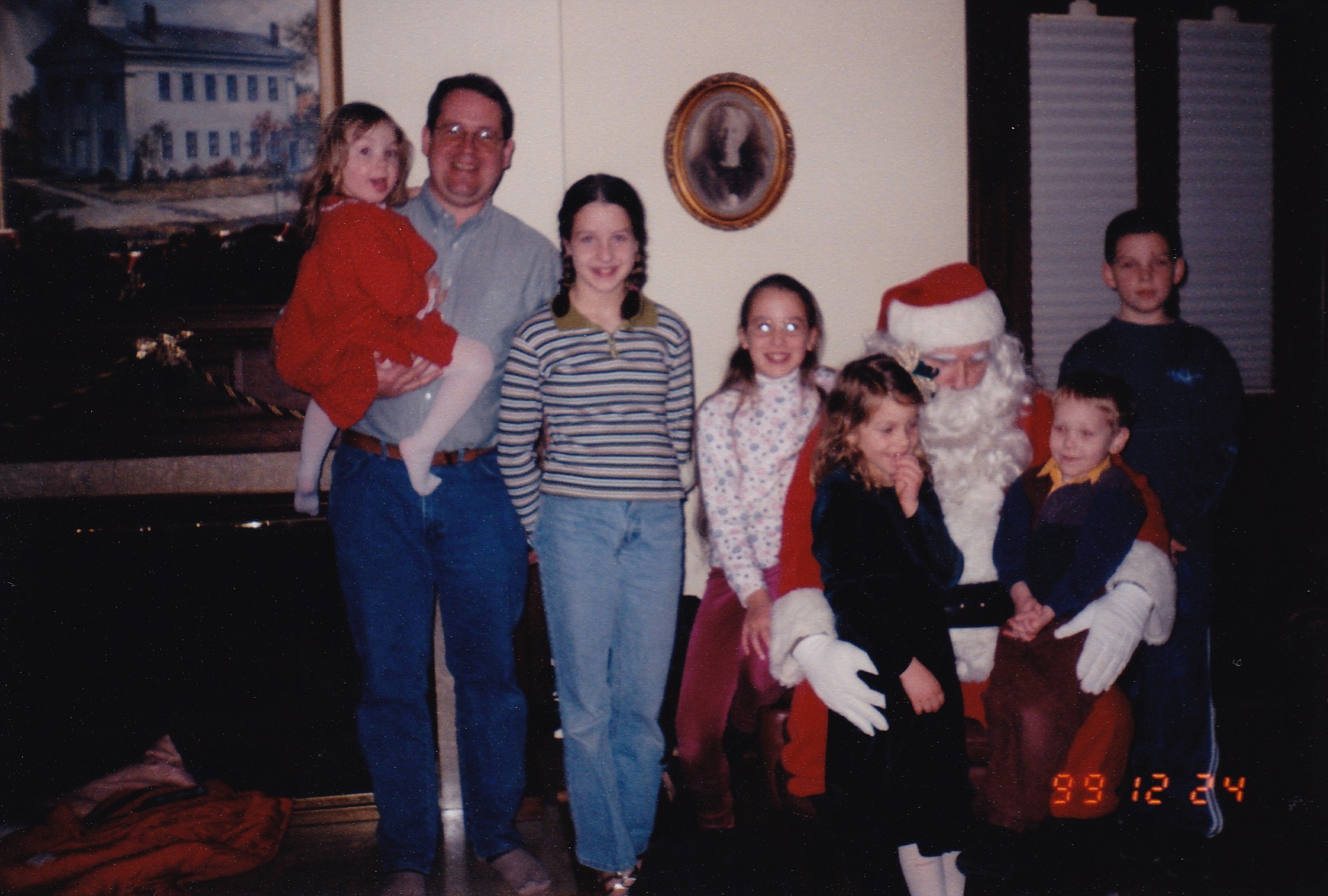 I think they almost believed in Santa all over again that year, when Santa Claus knocked at the front door early Christmas morning to perform a special delivery of snow saucers – one for every child in the house. On top of Susanna’s saucer was sitting her number one request from Santa that year, which no one but Santa could have obtained: a rainbow bear. There it was, with shimmering rainbow colors as beautiful and snuggly as could be, delivered personally by Santa himself!

It’s impossible to be a Christian unless one becomes like a child and cultivates the art of imagination. It’s difficult to keep hearing the Christmas bell

. We found that putting the St. Nicholas back into Santa Claus helped us redeem our imagination at Christmastime, and better appreciate the mystery and joy of the Incarnation.