This week, spring break at OU, is also the week of St. Patrick’s Day! Our family celebrates March vigorously and joyously in the spirit of Celtic Christianity.

Rachel and Hannah [update: and now Susanna!] participate in an Irish dance troupe which has appeared annually in the St. Patrick’s Day Parade in Oklahoma City, and which performs at numerous Irish-oriented functions throughout the week. Their spring break is always packed full of performances for nursing homes, children’s homes, Irish organizations and public festivals. Here’s a photo of the Celtic Praise Troupe 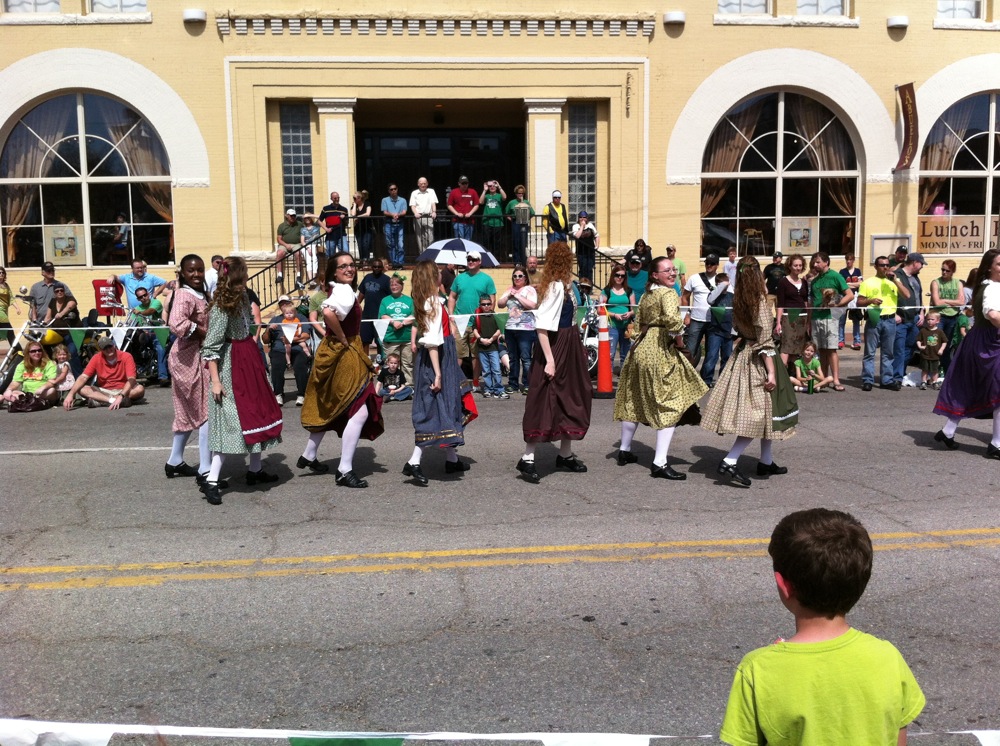 In addition to all the dance events, we celebrate the faith and courage of St. Patrick himself, whose prayer or “breastplate”

is an inspiration to Trinitarian confidence and action in the face of daily danger from unseen forces:

I bind unto myself the Name,
The strong Name of the Trinity,
By invocation of the same,
The Three in One and One in Three.
By Whom all nature hath creation,
Eternal Father, Spirit, Word:
Praise to the Lord of my salvation,
Salvation is of Christ the Lord.

singers offer a beautiful musical rendition of Patrick’s prayer, sung to the tune of “Parsley, Sage, Rosemary and Thyme.” This song appears on their CD entitled “Waymarks, Songs for the Journey.”

Other musical versions of St. Patrick’s prayer include the following:

I’ve sometimes given my family a book for either Valentine’s Day or St. Patrick’s Day. One year it was Celtic Daily Prayer

, a beautiful collection of prayers for living through the Christian year compiled by the Northumbria Community mentioned above. Thanks to our friends Robin and Karen Noad, who as former participants in the Community introduced us to them and to this prayer book! This week is a perfect occasion to become acquainted (or re-acquainted) with this book of prayers and devotional reflections. Indeed, its Aidan readings for the month of March feature meditations on Patrick’s breastplate.

One of the most insightful brief accounts of St. Patrick is found in Thomas Cahill’s bestseller, How the Irish Saved Civilization

. Reading chapters 4 and 5, either silently or aloud together, is an ideal way to spark reflection not only on the faith and life of St. Patrick in his confrontation with Celtic paganism, but also on how his successful engagement with the Ireland of that time offers striking parallels for our witness to the grace of God in today’s similarly pagan, post-Christian culture. The week of St. Patrick’s annually affords us an inviting opportunity to learn from Patrick, and to revisit Cahill’s compelling essay.

“The key to Patrick’s confidence – and it is the sort of ringing, rock-solid confidence on which a civilization may be built, an unmuffled confidence not heard since the Golden Ages of Greece and Rome – is his reliance on “the Creator of Creation,” the phrase with which the Breastplate opens and closes. Our Father in heaven, having created all things, even things that have since become bent or gone bad, will deliver us, his children, from all evil. But our Father is not only in faraway heaven, but lives among us. For he created everything by his Word, which was with him in the beginning, which became flesh in the human Jesus, and flames out in all his creatures.” Cahill, p. 132. , a Celtic monastery founded by Columba

off the west coast of Scotland, this manuscript of the four gospels consists of 680 pages, all but two of which are illuminated with elaborate celtic knots, interlacing, and depictions of various creatures. Even a square inch detail from the magnificent Chi Rho page

(right) contains more interlacings than are easily counted by the unaided eye. In the 13th century, over 400 years after it was created, Giraldus Cambrensis wrote:

“Look closely at it and you will penetrate the innermost secrets of art; you will find embellishments of such intricacy, such a wealth of knots and interlacing links that you might believe it was the work of an angel rather than a human being.”

“The complexity of these designs is often breath-taking. In one decoration, which occupies one inch square piece of a page, it is possible to count as many as 158 complex interlacements of white ribbon with a black border on either side. Some decorations can only be fully appreciated with magnifying glasses, although glasses of the required power were not available until hundreds of years after the book’s completion. The complicated knotwork and interweaving found in Kells and related manuscripts have many parallels in the metalwork and stone carving of the period. These designs have also had an enduring popularity. Indeed many of these motifs are used today in popular art including jewelry and tattoos.” This year my St. Patrick’s gift to our daughters is Bernard Meehan, The Book of Kells: An Illustrated Introduction to the Manuscript in Trinity College, Dublin

When continental Europe was untamed and unsettled in the wake of the Germanic invasions, Celtic scholars worked in monasteries in Ireland and Scotland. These scholars copied and translated Greek and Latin works, and re-introduced them and the gospel of Christ to Europe as the northern areas became settled.

That same Celtic heritage appears today in Irish dance, which praises Christ with steps and music that make the Celtic knotwork come alive, jumping off the Chi Rho page, with lively sound and interlacing motion.

, a remarkable animated portrait of medieval Celtic culture. The darkness of evil is portrayed with imaginative force that makes this film unsuitable for many children, but for pre-teens through adults it is a powerful cinematic experience not to be missed. I recommend the high-definition version available through iTunes

, which (if you have an iMac

) captures the detailed animations more richly than a DVD or web-streamed format.

Delightfully, the Secret of Kells movie includes a cat character named Pangur Ban. The filmmakers thus paid tribute to a 9th-century Celtic scholar who scribbled a poem in the margin of a manuscript of Virgil he was copying, in which he compared his scholarly activity to that of Pangur Ban, his cat:

“I and Pangur Ban my cat
‘Tis a like task we are at:
Hunting mice is his delight,
Hunting words I sit all night…

So in peace our task we ply,
Pangur Ban, my cat, and I;
In our arts we find our bliss,
I have mine and he has his…”

The complete poem, much longer, is reproduced in Cahill, and available online at ceantar.org

In another post, I’ve quoted from Caedmon’s Song. An illustrated book with that title by Ruth Ashby makes another great St. Patrick’s family gift idea.

St. Patrick’s day is not only for the Irish!

Patrick and the heritage of Celtic Christianity belong to all of us. His holiday this week is worthy of vigorous, joyous, thoughtful celebration!

This entry was posted in Family and tagged Holidays. Bookmark the permalink.