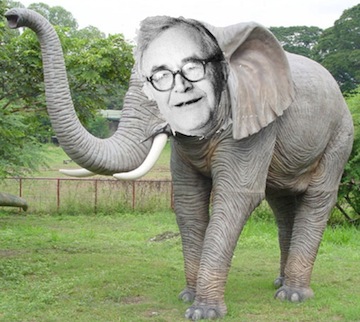 To begin reading Barth, short introductions are particularly helpful because of three ways Barth is an elephant:

1. First, Barth is the elephant in the room

of modern theology. Many evangelicals and Reformed distrust him, while mainstream Protestants and Enlightenment progressives often dismiss him. Surprisingly, Roman Catholics often seem to take him most seriously as a conversation partner. Perhaps we all need a little help to learn how to talk about him.

2. Second, despite point #1, Barth’s presence on the theological scene of the last century is mammoth

in both scope and size, and he simply cannot be ignored. It is impossible to be minimally conversant with Christian theology unless one has at least such an understanding of Barth as might be gained by reading a competent short introduction.

3. Third, in addition to point #2, Barth’s theological oeuvre is disparate in nature. Not surprisingly, then, accounts of Barth’s theology often seem as starkly incompatible as the blind men’s reports of the elephant

. Some accounts focus upon the trunk, others study the ears or teeth, many marvel at the huge body, a few fasten onto the tail or remark on the four pillars of legs and feet. Few convey an accurate overall picture of Barth’s theological vision. Whether considered chronologically, from his first Commentary on Romans to the last volumes of Church Dogmatics, or whether considered by subject matter, it is impossible to gain a representative sampling of Barth by simply “dipping into” a few chapters here or there. Again, a competent introduction comes to the beginner’s aid.

As I have embarked on a five-year program of reading Karl Barth, the short introductions listed below have benefited me, and I commend any combination of them to you if you are starting out on the road to understanding Barth. I’m sure there are other works that would serve the same purpose, and in a future post I’ll list some of the longer works that serve as excellent companions to reading Barth in depth, but any one of these brief introductions can orient a beginner to Barth’s theology. They will enable you to decide just what and how much more of Barth you want to read. While there is substantial overlap in the content of these little books, and while any one of them alone would stand as a sufficient introduction for many purposes, they are complementary in that each adds a distinctive dimension to understanding Barth that in combination is quite helpful for the beginner. None of these are a substitute for reading Barth himself, of course. Rather, I believe each will entice you to read Barth with more delight and anticipation; at least, they have had this effect on me.

Update: See also Tom Greggs’ introduction to Barth and his influence in the Faith and Modernity video timeline of St. John’s College, Nottingham:

This entry was posted in Theology and tagged Karl Barth. Bookmark the permalink.