CSNTM at iTunes U

Before a minor surgical procedure last Friday, I prepared a gargantuan playlist on iTunes to last through the weekend and beyond. Catching up on video and audio podcasts kept my mind happily distracted as I recovered. Chief among the joys of the weekend was the opportunity to listen to all the audios and videos recently posted at iTunes U by the Center for the Study of New Testament Manuscripts

, a non-profit organization I’ve mentioned on this blog before (here and here).

In one of those previous posts, I described my delight at hearing Daniel Wallace, the director of CSNTM, speak at an Accordance Users Conference. Given my own passion for digitization in order to preserve rare documents and make them openly accessible to the public, it was a joy to meet him in person. Wallace has led expeditions throughout Europe and the Middle East in search of New Testament manuscripts in his quest to digitize them and make them available for study on the CSNTM website. Wallace is also the author of Greek Grammar Beyond the Basics

, a widely-used textbook for advanced study of New Testament Greek.

The chief mission of the CSNTM is to photograph every surviving New Testament manuscript, and to make high-quality digitized versions widely available for research, utilizing developing technologies for the study of ancient texts. In pursuit of these aims, the CSNTM mounts expeditions to locate, identify and digitize New Testament manuscripts around the world (read more about CSNTM’s mission

One can learn much about the preservation and study of ancient manuscripts simply by browsing CSNTM’s substantial website. However, the new resources posted at iTunes U provide an excellent introduction to these topics.

| Open iTunes U to CSNTM

CSNTM’s resources at iTunes U include short videos on the following six topics:

Here’s a more detailed look at the individual videos already available for each topic: 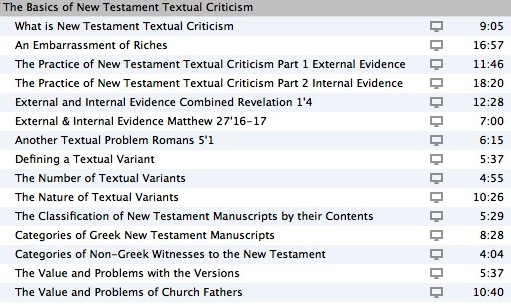 (Open iTunes U to CSNTM

Text critic and best-selling author Bart Ehrman recently posted the following video at YouTube, entitled “Is The Original New Testament Lost? A Dialogue with Dr. Bart Ehrman & Dr. Daniel Wallace.” This video records a discussion at Chapel Hill held on February 1 of this year, which is an effective entry point into contemporary discussion of the role of textual criticism, the significance of the discovery and publication of new texts of the Bible, and the work of the CSNTM.

A similar dialogue between Ehrman and Wallace was held in Dallas last October 1, which is available as a DVD from CSNTM. The YouTube video offers the essence of either discussion. The DVD has a much higher production value, showing closeups and shots from different angles, which makes watching less monotonous. Think of the DVD’s cost ($15.50) as a contribution to the work of CSNTM (purchase here

Update 8/1/12: Ehrman and Wallace have begun their own blogs. Here’s an example post

where Wallace replies to a comment by Ehrman on their debates.

3 Responses to CSNTM at iTunes U